My First Experience at RCJ

The following testimonial is a forum entry by JOArtist, posted on 3/3/2016 in the Rain City Jacks group forum at bateworld.com. It has not been edited from the original and is presented here in its entirety.  [Paul]

I just had a fantastic time at Rain City Jacks. On the chance that other guys might have similar concerns about attending an RCJ event, I’ll describe what I found there and why I’ll be going again.

I’ve always had the fantasy that a JO club could be a great place: lots of fellow masturbators, all getting off together. Hoping to find that, over the years I’ve gone to a half-dozen different places that described themselves as JO clubs. The reality of these places was always disappointing. Part of the problem was surely me, not fully engaging in the event or knowing the local conventions. But I was also turned off by the environments they all seemed to share: a place so dark I could barely see anything, made of tiny rooms and twisty corridors I kept bumping into, and aggressively loud and fast techno music. Nobody ever said a word or made a sound (not that you could have heard them over the music). There was no human connection, only barely-perceptible body parts. Nothing about that felt inviting or even particularly sexy to me. I’d always stay a while, hoping to get into it, but I never did. I’d eventually find a spot, get into my own cock, cum, and go home, vowing next time to just stay at home and have a much better time with myself. I recently learned that these were probably bathhouses and sex clubs, and not really JO clubs at all.

A few buddies here on BW have told me RCJ was different, but I held off, because I wanted to avoid a repeat of what I’d found elsewhere. Plus I’ve put on some pounds, and along with an average-sized cock, I felt that I’d be unattractive, self-conscious, and unwelcome.

But urged by my online pals, I worked up the courage to go to the Sunday afternoon event a few days ago.

I immediately realized this place was different and better than the places I’d been before. Two friendly guys were working the door, checking people in and helping new guys with the signup process. They were warm and welcoming and clearly happy to be there. They set a really great and friendly, no-pressure vibe. Then they offered to give me a tour and overview. What a great idea! No club I’d ever been to before offered anything like that.

A few minutes later another very friendly fellow arrived and collected the 4 or 5 of us new guys. He showed us around the locker room, and then we sat down and went over the rules, which I thought were really well designed, including the wristbands that told others whether or not to ask before touching. Then we went into the space where all the guys were.

It was nothing like the clubs I’d been to before. The music was slower-paced and set to a nice background volume. You could talk to people, and be heard. The space was lit gently, so you could see everyone and everything (no more bumping into walls and benches!). The space itself was a big open room with lots of places to sit and stand, along with a room holding a couple of big, soft beds. It felt inviting.

When the tour was done, I was surprised at how comfortable I felt stripping down in the locker room. When I went back into the big room, and really looked around, the last of my worries disappeared. There were men of all ages and sizes, tall and short, thin and wide, cocks big and small, soft and hard, and though I was primed for any kind of judgment or dismissal, there was none to be found. It was emotionally easier than going to a dinner party where you only know one or two people.

I won’t say I wish I’d gone earlier, because my own fears might have dominated my experience and I might not have had a good time. But I’m glad that I faced those fears and decided to give it try, going in with a positive attitude. That helped me discover a JO club that was the kind of place I’d always hoped for, and in my own backyard. I was worried that nobody would want to even walk up to an overweight guy. Instead, I was asked several times by sexy men if they could stroke my cock for a while. And man, did they know how to stroke cock! I met another guy who enjoys frot, and we had a fantastic time grinding together, standing up and then on one of the beds. I hope I made all of these guys feel as good as they made me feel. 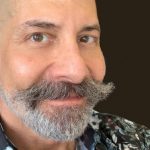 Paul
Paul Rosenberg is the founder and manager of Rain City Jacks. A husband, writer, singer, baker, atheist and shameless erotophile, Paul wants nothing more than to help reasonable people be happy, especially in their sex lives.

This site uses Akismet to reduce spam. Learn how your comment data is processed.

We are taking this step for the health and well-being of all our community and in accordance with current recommendations of King County Public Health.

This suspension of events is indefinite, but not forever! Your past support means we have the resources to resume operations when the public health situation and governmental recommendations allow for resumption of community gatherings. We fully intend to restart our event schedule as soon as possible, although not until we can again be confident, as we’ve always been, that we can all feel safe at the Jacks and that our experiences there are wholly good, positive and free of fear and shame.

I am always happy to receive and respond to your questions. Feel free to email me directly. I will continue to send out a monthly newsletter to subscribers to our RCJ Alerts email list (subscribe here if you don’t already get our emails). You can also follow us on Twitter for regular updates and some much-needed distractions.

On behalf of myself and all our volunteers, thank you for being a part of Rain City Jacks. We hope to see you back in the playspace again soon.

What to Expect at a Jacks Event
Themes Survey, May 2016