(This entry is based upon content from the former RCJ web site. It has been revised from the original entry, first published in June, 2005.)

It was in the 1970s that groups of gay men began meeting regularly for jack-off parties. When urban gay culture was expanding in the decade after Stonewall, jack-off groups appeared as just one of many gay niche-cultures. It was only after the horrific revelations of 1981 that AIDS began to precipitate a new influx of men into JO clubs: men who were interested in group sex without the risk of disease. It was when the term “safe sex” was coined.

The first large, organized jack-off groups in the US showed up in the big cities, along with all the other gay cultural phenomena of the seventies. New York and San Francisco are home to two venerable Jacks clubs. New York Jacks (established in 1980) and San Francisco Jacks (1983) established the model that has been copied and propagated throughout the world ever since.

Jacking off is the defining activity of every JO club, as expressed in the words, “… Jerking off is the reason for the club’s being. The New York Jacks is a meeting of men who wish their primary sexual outlet to be J.O. in the company of other like-minded men…”

At the beginning, curiosity seekers were discouraged. “One of the hottest aspects of our club is the mutuality of interest that prevails. Proud as we may be of our club, it is incumbent on us all to discourage visitors whose interest arises merely out of curiosity… If a member or guest cannot be fully satisfied by J.O. alone, the New York Jacks is not the club for him.“ Those early sentiments laid out by the original NY Jacks came from a time when a vast array of same-sex play options were widely available and the men who really got deeply into the scene envisioned a sort of purity.

As the dark days of AIDS faded into new treatments and prevention protocols, fear of HIV has waned while JO clubs have continued to attract members as long as their organizers have the resources to host them. 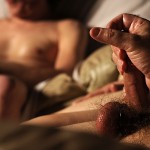